The Russian October Revolution of 1917 gave impetus to a burst of creativity in art and architecture. The artists confronted a challenging task – to invent a modern language of proletarian architecture.

What was the basis to be grounded on?

What should be said by this?

General directions and the only allowed line in architecture, authorized by the Soviet government, would appear much later. Meantime, socialist art emerged as an intertwining of the old and the new.

The first years after the revolution represented a period of romantic symbolism, and architecture became a tool for the dissemination of revolutionary ideas. The purpose was to create significant proletarian architecture. Thus, the search for its symbols and ideals was conducted in various directions.

One of them represented the revival of world architectural traditions. In those, one could identify the motives of the Doric order, Roman baths, Romanesque architecture, architecture of the French revolution. 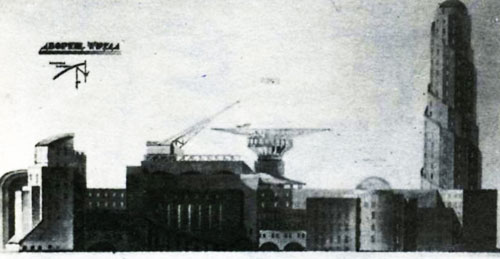 Symbolic and engineering functionalism of G. Ludwig. Palace of Labor in Moscow. Competitive project. 1922-1923 facade. From the book "Architecture of the Soviet avant-garde" by S. Khan-Magomedov

Also, Soviet architects had put forward "industrial" motives and a romantic interpretation of technology as a symbol of the proletariat.

From 1917 to 1925, many new movements emerged that sought new symbols of proletarian architecture: “symbolic romanticism,” “modernized

Romanesque style,” “symbolic-engineering functionalism,” and “proletarian classics.” In the architecture of Kharkiv,  significant buildings of the “Donvuhillya” Trust and the Commodity Exchange characterize that time the best, representing the so-called Revolutionary Industrial Romanticism.

To give a general idea of ​stylistic features of Kharkiv architecture of the 1920–1930s, we have identified six stylistic directions, providing a stylistic description of each building. 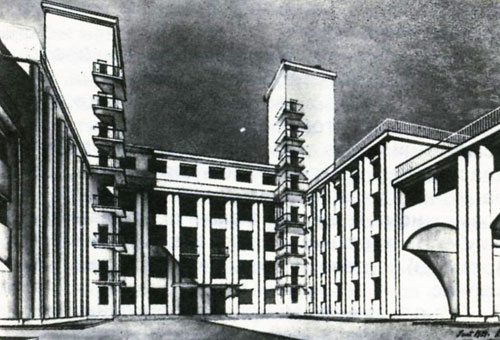 "Proletarian Classics" by I. Fomin. New Moss Board Building. 1929-1930. Courtyard project (perspective). From the book "Architecture of the Soviet avant-garde" by S. Khan-Magomedov